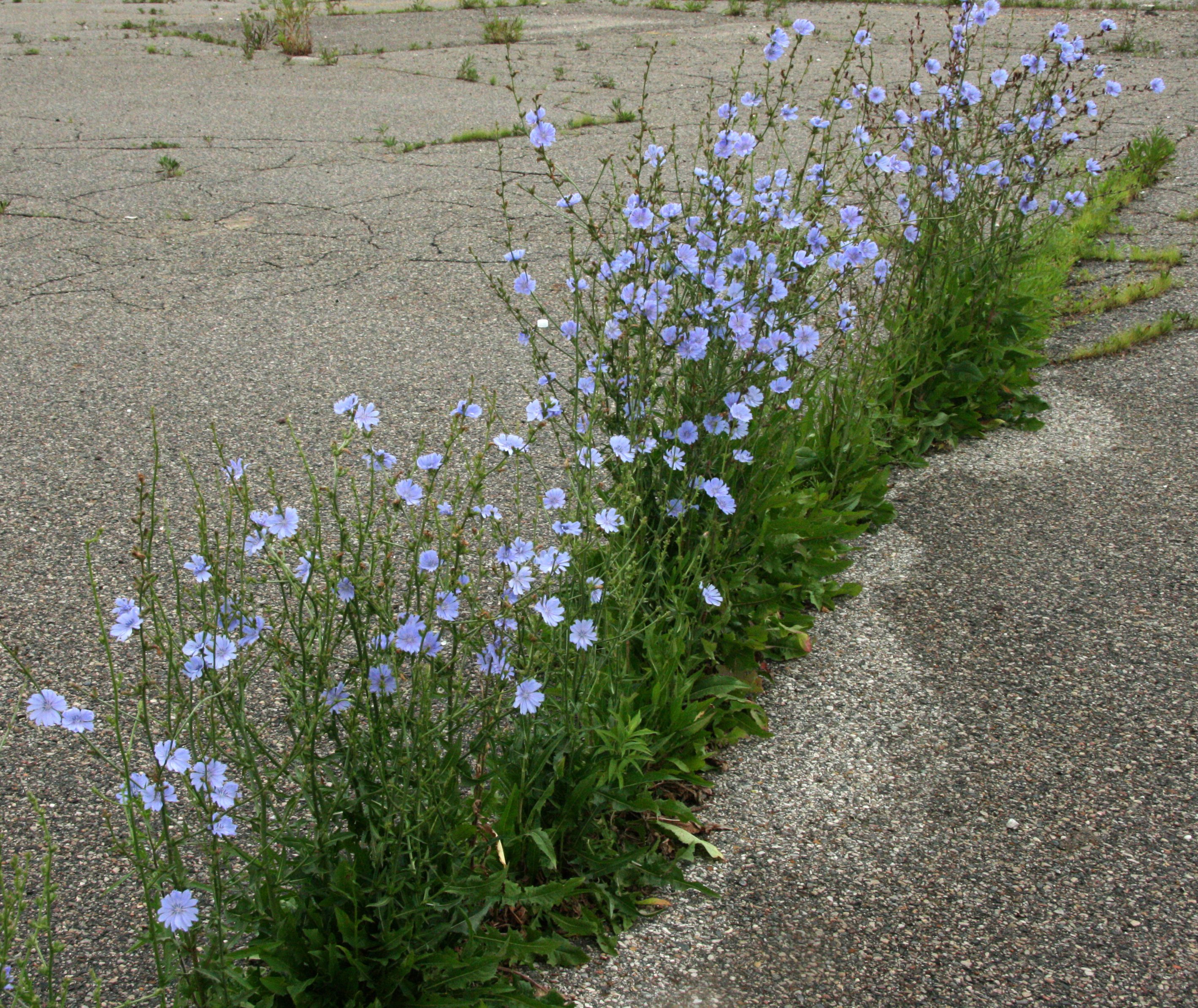 Chicory growing in the cracks of the pavement

The reality of climate change seems to have finally penetrated the American psyche. People are thinking about how to reduce their carbon footprint as well as how to protect their property from rising sea and river levels. It’s hard to argue with the fact that the past twenty years have been the warmest on record. Many people are now willing to admit—albeit begrudgingly—that the world is changing and that going back to the way things used to be is no longer an option. What holds for humans also holds for plants, the main difference being that the plants are not in denial about the future. Some species, particularly those near the tops of mountains, have gone into decline as the climate has changed, others, particularly those we label as invasive, have been making the most of these changes. They grow better with longer growing seasons, warmer winters and earlier springs and, with the help of birds, have spread rapidly across the landscape. Like it or not, the plants we consider weeds—including both native and non-native species—know exactly what’s going on and are taking full advantage of it—they are the face of climate adaptation. 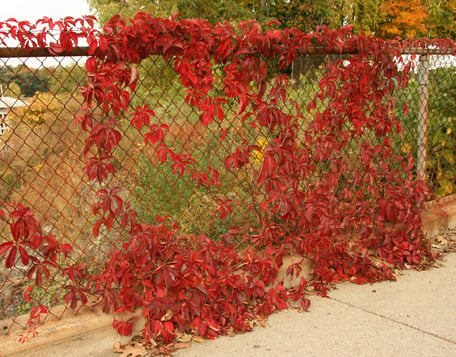 Efforts to control such aggressive species—as every gardener knows—requires constant vigilance and endless effort. As hard as it is to get rid of invasive species in one’s own garden, it’s super difficult to control them at the landscape scale

Virginia creeper growing over a fence

where herbicides are the only approach that really works. In natural landscapes that are more or less intact, invasives can be controlled as long as they are not too well established. In landscapes where the soil has been drastically disturbed and the original vegetation has been removed (including most of our cities and suburbs), invasives have gained the upper hand and eradicating them is not a feasible option. It’s sad but true that the disturbance created by the use of herbicides or mechanical removal typically opens the door for some new invasive species to say nothing of the fact that it often negatively impacts nearby native species. Manipulating the landscape so as to favor one species over another is called gardening, and people who garden know that weeding is an endless task. The same holds true for ecological restorations of natural landscapes—they only work if they are followed up with years of consistent maintenance, which typically doesn’t happen after the initial eradication effort.

The minimally managed wild landscapes that surround our cities and suburbs 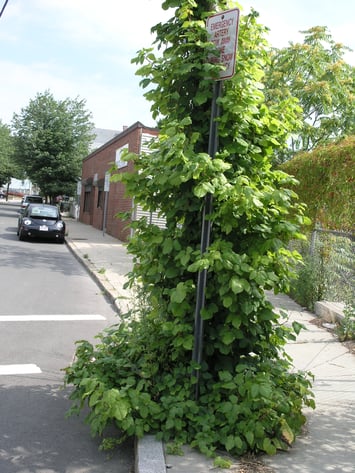 have been adapting to climate change for decades. The net result is the emergence of so-called “novel ecosystems” that consist of mix of native and non-native species that know how to deal with the reality of warmer air and soil temperatures, more CO2 in the atmosphere, and higher levels of nitrogen in the soil. Like them or not, novel ecosystems are flourishing under these new conditions and contributing valuable ecological services to the

organisms—including both humans and animals—that inhabit them. Given that the eradication of invasive species at the landscape scale is not really an option, we need to learn how live with them, by which I mean how to manage them so as to increase their ecological and aesthetic value. This means removing high-climbing vines, plants like poison ivy that are toxic to humans, and trees that are hazardous to the people who visit these landscapes. The path forward is one of accommodation not eradication.

Peter Del Tredici is a botanist specializing in the growth and development of trees. He worked at the Arnold Arboretum of Harvard University for 35 years and was also an Associate Professor in the Landscape Architecture Department at the Harvard Graduate School of Design for 24 years. His widely acclaimed book, “Wild Urban Plants of the Northeast: A Field Guide” (2nd ed., 2020, Cornell University Press), catalogues the spontaneous vegetation that flourishes in cities and makes the case that it improves the quality of urban life. 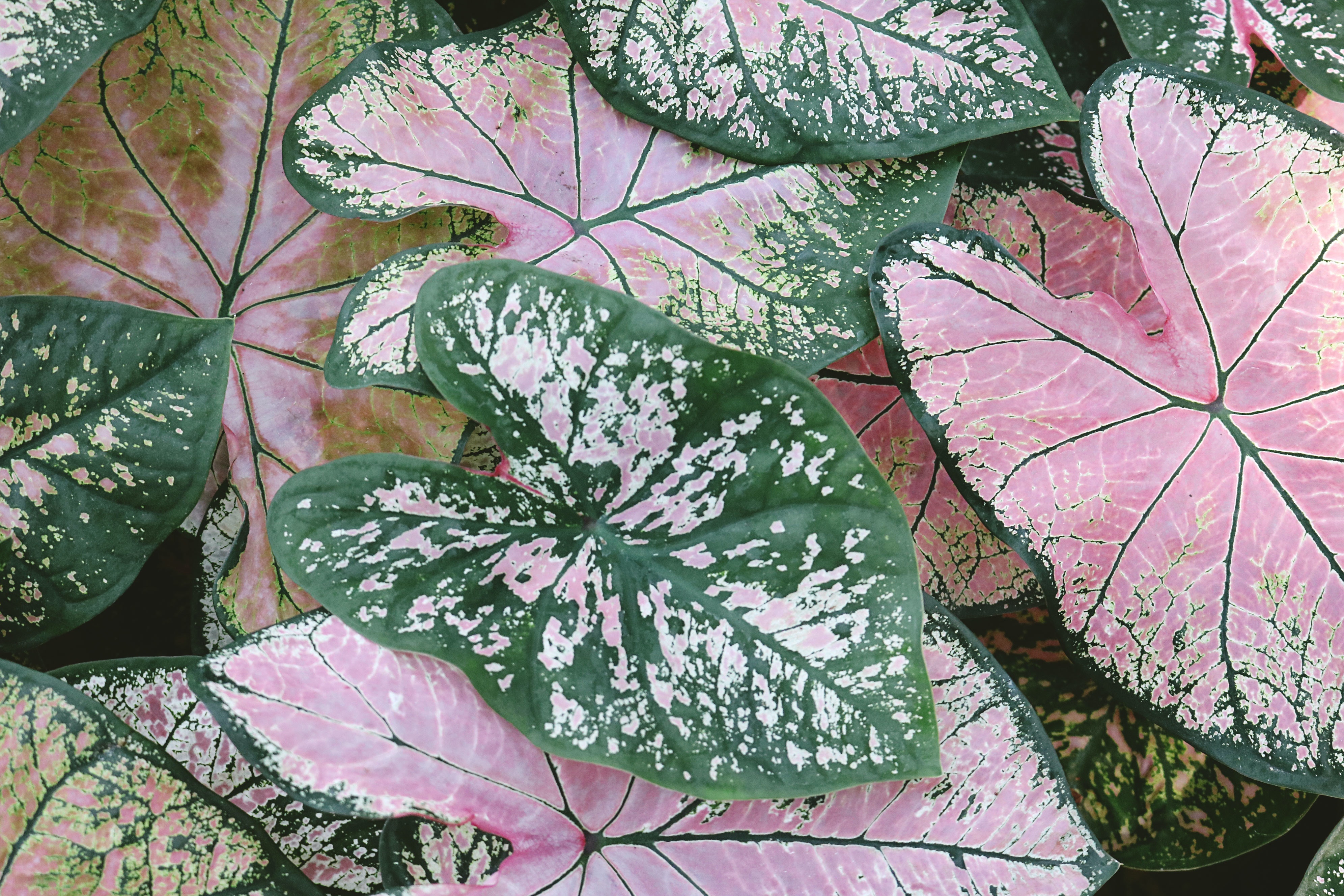