Viburnum acerifolium is commonly known as Maple leaf viburnum whose start in spring could be described as dull to an unknowing passerby but grows to be undeniably breathtaking in the summer and fall. This deciduous woodland shrub is hardy from zones 4-8 and calls much of the eastern U.S. its home, stretching up to Quebec and down to Florida. Reaching three to six feet tall it will, with time and proper conditions, sucker to naturalize a thicket or hedge. Siting this plant in part shade is the most important condition, preferred soil types are quite variable and tolerant but should remain well watered while being established. The leaf shape is, as the name suggests, reminiscent of a maple leaf and a bit fuzzy to the touch. Flowers usually appear in mid to late spring as creamy white with a flat top, perfect for a hungry blue azure or skipper butterfly to gather nectar from. The flowers are followed by pea-size fruit that mature to bluish-black by late summer and are browsed upon by skunks, deer, chipmunks, birds, and others. The leaves take off their green summer coat to reveal a dazzling display of fall color. Every hue from pink to dark burgundy reveals itself, wowing the passerby. 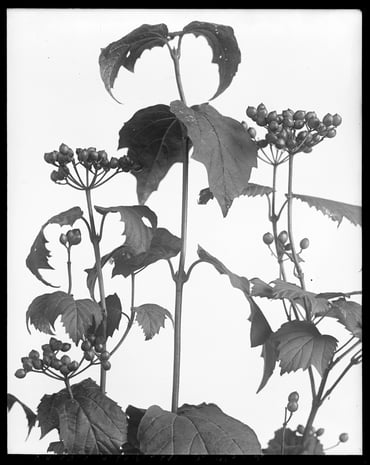 Edwin Hale Lincoln must have enjoyed this species as he documented it at multiple times throughout the growing season. In spring he would have gently wiped the bumble bee from her busy work collecting nectar and pollen, in fall he might have snacked on a fruit or two himself as he collected his specimen.