In the Gardens Blog » Latest Articles
Categories
May 11, 2022 • Garden Educator

Bumble Bee — Pollinator of the Week

As the world begins to warm and the days get a little longer, you may begin to see some “flying teddy bears” emerge from hibernation. One of the most beloved and welcome insects in any garden, bumblebees (Bombus sp.) are incredibly effective pollinators.

The bumblebee genus, Bombus, roughly translates to buzzing or humming; bumblebees are one of the only genera of bees to “buzz” flowers. This “buzzing” refers to the vibration of the bee’s flight muscles, facilitating pollination by more efficiently extracting pollen from the anthers of flowers. Many popular crops, like blueberries, cranberries, and tomatoes, have produced higher yields when buzzed, making bumblebees one of the most frequently sought-after commercial bee colony. Here at the Garden at Elm Bank, we especially appreciate the bumblebees’ presence, as many of our perennials are highly adapted to dispense pollen when vibrated. As you walk through the Olmsted Historic Italianate Garden, be sure to thank the bumblebees- we couldn’t have our beautiful roses without them! 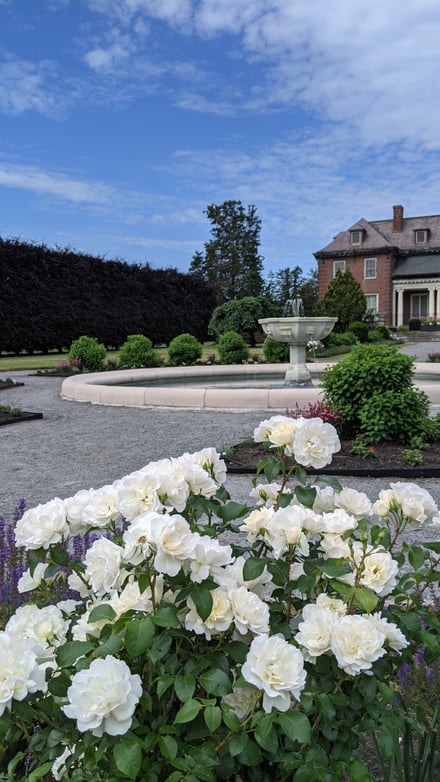 While most bee species prefer open meadows and hayfields, there are way to bring these fuzzy friends into your garden. Bumblebees are generalist foragers, meaning that they’ll pretty much pollinate anything! They are most attracted to gardens with a diversity of flora, so it is best to select plants with a variety of shapes, colors, and blooming periods. There is a lot of variation in bumblebee morphology across species; for example, long-tongued species are more likely to visit trumpet-shaped flowers, whereas short-tongued species prefer more shallow flowers. It is also vital to include plants that either have a long blooming period or a selection of plants that will bloom at different times throughout the season. Bumblebees are active throughout the growing season, both due to the sheer diversity of species and the duration of the bee’s lifecycle. Starting in late March, queens will come out from their winter shelters and begin forming a new colony. Bumblebees do not dig their own nest cavities, so providing the queens with hollow aboveground structures may help bring them into your garden. Once a nest site is found, the queen will construct a honeypot for nectar storage and lay her first brood of eggs. While the larvae mature, the queen is responsible for both incubating the baby bees and foraging for food. After the larvae finish developing into worker bees, the queen will stay in the nest laying more eggs while the workers forage for nectar. Toward the end of the growing season, male drones will leave the hive to mate with next season’s queen. The new queen will then leave the mother hive to search for an overwintering site. Mated queens will typically spend winter in rotting logs, loose dirt, or mulch; if you find one of these new queens during late fall or early spring clean-up, please try not to disturb her!

Despite their popularity and benefits to gardens everywhere, recent analyses indicate that more than one-quarter of bumblebees native to North America face some degree of extinction risk. Destruction of nests and overwintering sites is one common cause, but destruction of habitat and fragmentation can also negatively impact bee populations. While bumblebees have been known to travel up to 10k from their nest to acquire resources, this also puts them at greater risk of harm via predation than if they were to forage closer to their homebase. Application of pesticides have also led to a decrease in bumblebee colonies, either through immediate toxicity or having sublethal effects on foraging behavior and colony development overtime. Due to the seasonal nature of the bee’s life cycle, climate change has harmed many bumblebee colonies by altering the timing of queen emergence and availability of resources. Conservation of native bumblebee species is vital to the overall success of our food systems and may have cascading effects on plant, bird, and mammal populations in the surrounding ecosystem. By supporting Massachusetts Horticultural Society and tending to your own home gardens, you are helping bumblebee colonies across the state!

While you’re in the Garden, see if you can spot some of these bumblebee species:

If you see these bumblebees-or any other pollinators- around the Garden, don’t hesitate to send some photos to the Xerces Society!