A Greenhouse for Everyone

It has been said that the Romans were the first to grow out-of-season crops. They used sheets of mica placed over growing beds to force plants into growth early in the season. Forcing plants languished until glass was invented, but it wasn’t until large sheets of glass became available in the late 18th century that glass houses as we know them came into their own. 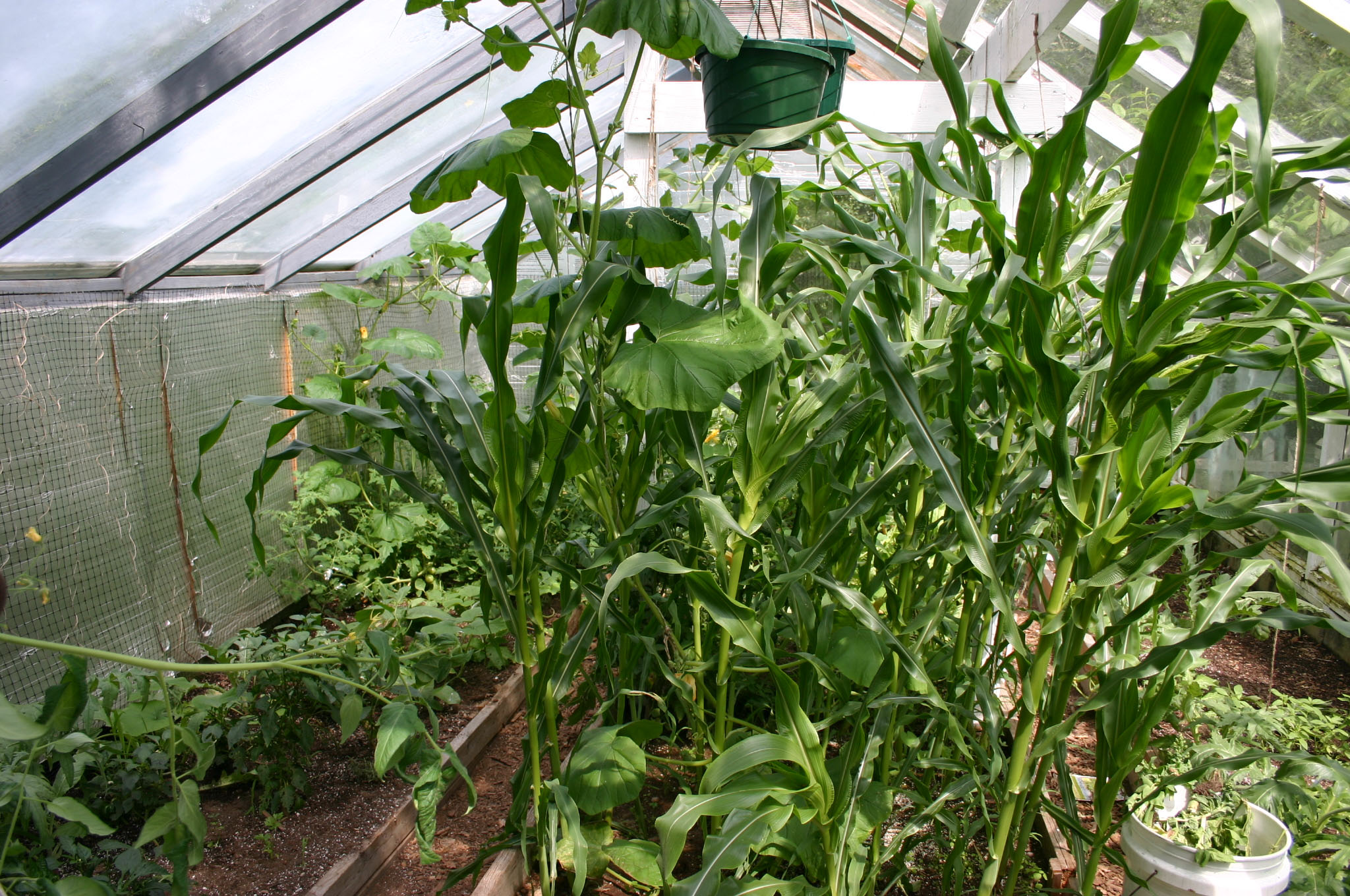 In the unheated greenhouse, plants are usually four to six weeks ahead of their counterparts in the outdoor garden. By growing in the greenhouse and outdoors it is possible to obtain two and sometimes three crops of the same plants. Here an experimental crop of corn and squash are growing in the middle bed., peppers in the bed to the right hand side and tomatoes in the bed to the rights. The images was taken in may in New England.

Large sheets of glass, some as large as 16”x16”, could be fashioned into windows that could protect plants from harsh winter weather. For example, it is said that George Washington grew lemon, limes, pineapples and other tropical fruit in a greenhouse in 1787 at Mount Vernon. Glasshouses, as they were originally called, became the rage in England and later, in America. They eventually came to be called greenhouses because the plants inside stayed green all winter long.

Some were heated by wood burning fires that needed to be kept fueled all night long, others, like Washington’s Mount Vernon greenhouse had flues similar to those developed by the Romans to warm houses under the floor that were kept warm by wood fires. But the majority of smaller greenhouses used a far simpler and often more efficient way to stay warm. Trees and shrubs were grown in large pots and fresh horse manure piled around the pots. The rotting horse manure emitted enough heat to keep the pots warm and plants in growth all winter long. In fact, in experiments that I have done, rotting manure and compost can reach temperatures of up to 160 degrees for up to six weeks before the pile needs turning. In this way, huge greenhouses such as the Crystal Palace in London, built for the Great Exhibition in 1851, could be kept warm (and smelly). According to reports, some of the trees in the Crystal Palace exhibition were almost 100 feet tall.

Greenhouse usage declined after World War One. Far too many men died during the war and there was nobody to maintain the huge structures. It wasn’t until the 1940s that greenhouses became popular again. Many of these greenhouses used plastic instead of glass, glass being too expensive and brittle. Today, for the home gardener, owning a greenhouse even in the coldest parts of the country, enables a keen gardener to start seeds early and to maintain plants over New England’s often brutal winters. 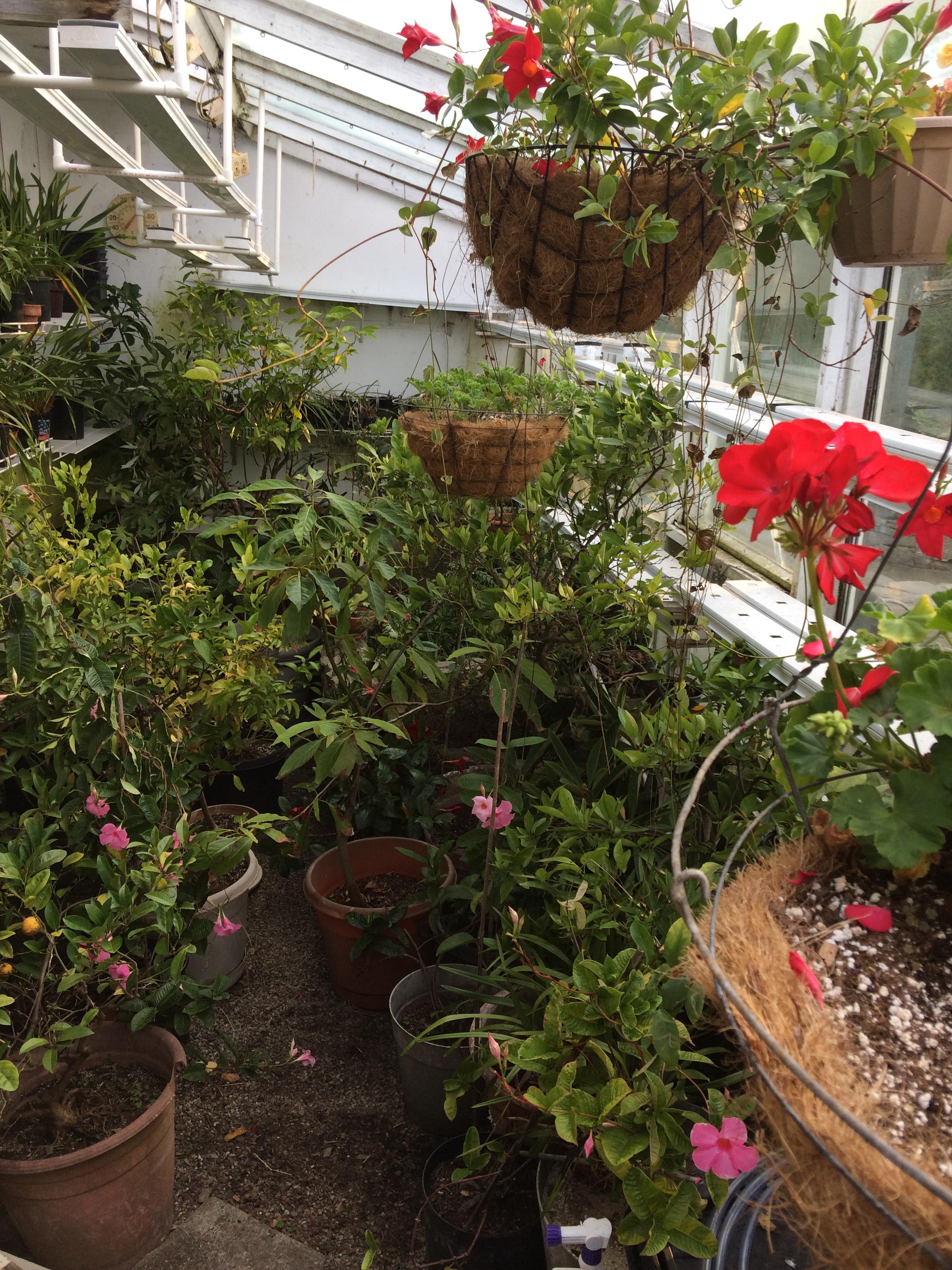 In spring the greenhouse gets very crowded with many seed flats ready to be planted in the vegetable and flower beds.

What to Look for When Buying a Greenhouse

Before you start looking at greenhouses you should decide what you will grow in it. Some uses, such as seed starting and growing succulents require a lot of shelves or table space, heat and light. Other uses need far less shelf space. For example, growing citrus fruit trees in a large pot.

Many gardeners buy a greenhouse to use for seed starting in spring. That’s fine but remember that most gardeners want to be able to plant out good sized plants as soon as the ground is warm enough. That often means that night- time temperatures when you start seeds could be below freezing. Because seeds like warm temperatures to germinate (often in the 65 to 75oF range) you will have to provide heat and light to help get your seeds to germinate. This can be done with LED grow lights and a heat mat, but that also means that you will need electricity in your greenhouse.

Many orchid lovers have a greenhouse specifically for orchids. Some orchids like high temperatures and high humidity. Some like a desert style environment. Others such as cymbidiums can take a light frost. To grow orchids in a greenhouse you need to know what type of habitat your orchids prefer and you will need to provide a suitable environment.

Many gardeners want to grow vegetables all year. In an unheated greenhouse in New England, you can grow spinach, lettuce and other greens even when nighttime temperatures drop below freezing. Other plants such as leek, kale, chard and carrots can be left in the ground or in pots in the greenhouse until needed.

For some gardeners, growing flowers year-round is an enviable goal. Many bulbs, for example, paperwhites and daffodils, can easily be forced in a greenhouse. Other flowering plants such as pelargoniums and geraniums will keep flowering for most of the year as long as they are warm.

Many cacti and succulents are small plants that grow in dry places. Your greenhouse will need to emulate these conditions and because they are small plants you will probably need a lot of tables or shelving.

You can easily grow citrus, mango, avocado and other fresh fruit in a greenhouse, but some citrus trees can grow quite tall and live in a large pot. Several of my citrus trees are well over six feet tall and produce fruit each season. However, they need to be kept warm all winter. In summer these large trees are moved out to the patio where they can enjoy summer warmth and set fruit. 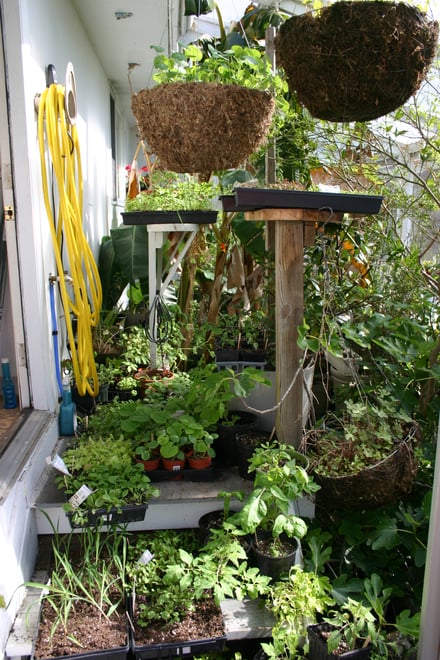 > The author's heated lean-to greenhouse with a variety of plants. The newly installed hydroponic guttering (top left) is above the plants to make use of unused space.

Another factor that should be considered before you buy a greenhouse is size. The size of your greenhouse is a balance between the plants you want to keep in it, the cost of the structure and the cost of heating it in winter. First, understand that a small greenhouse heats up and cools down faster than does a large greenhouse. Like humans, most plants do not like to be almost frozen at night and heated to 100oF during the daytime. So larger is better from a heating and cooling standpoint.

Size is also influenced by the space available for its location and whether it is freestanding or lean-to style greenhouse. Free standing greenhouses can be any size and ideally should be near the garden. The size of a lean-to greenhouse is often limited by the available wall space.

Another size factor is your experience. If you are a keen, experienced gardener, look at the largest greenhouse you can afford, you will fill it with plants. For example, my 30’x10’ lean-to greenhouse contains over 200 plants ranging from large citrus trees to pots of Streptocarpus (Cape Primrose). They all need to be kept warm and some need lighting during winter’s short days.

Roger Marshall has been an organic gardener for more than 50 years. He has owned a greenhouse for about 40 years and is the author of ‘How to Build Your Own Greenhouse,’ and ‘The Greenhouse Gardener’s Manual.’ 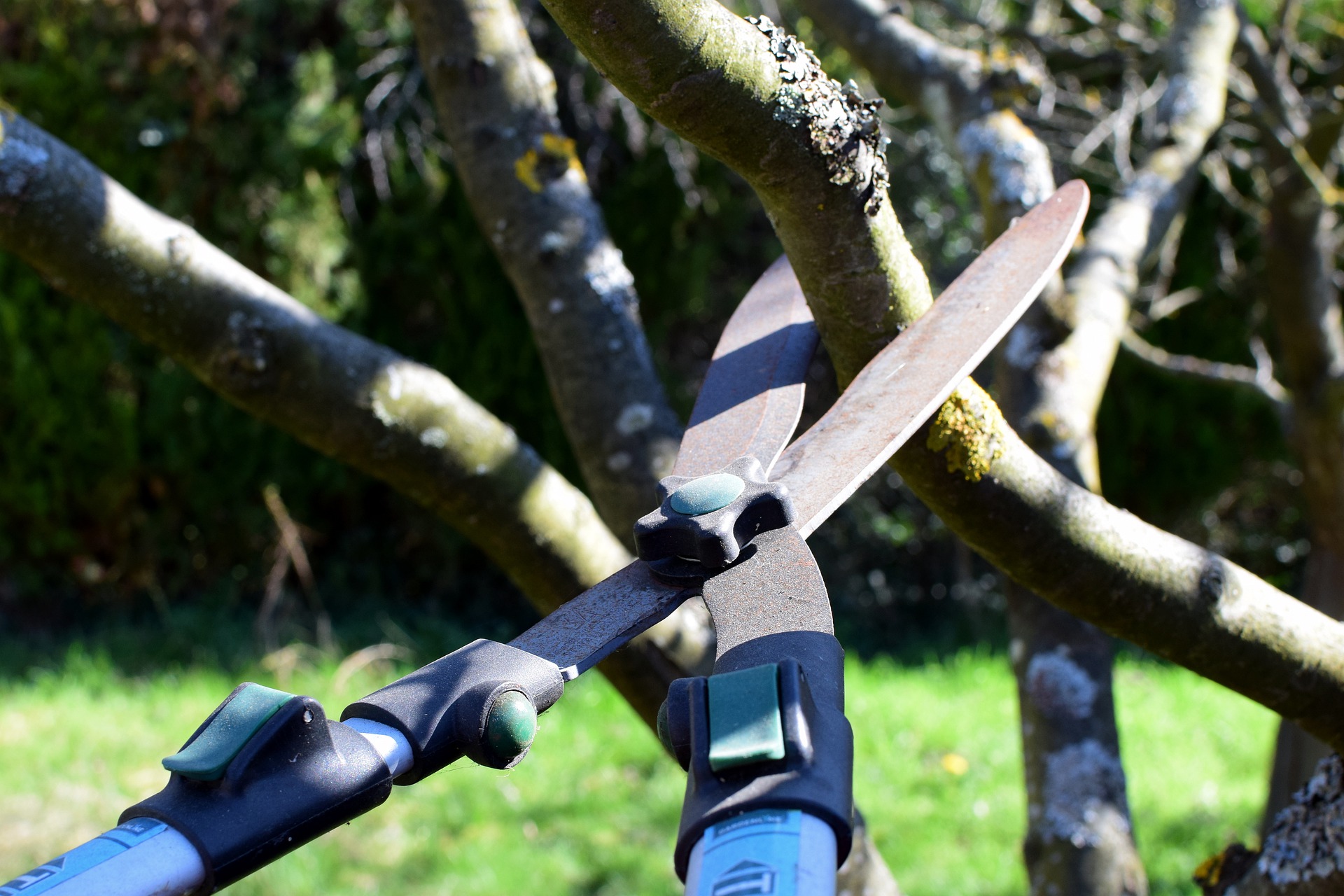 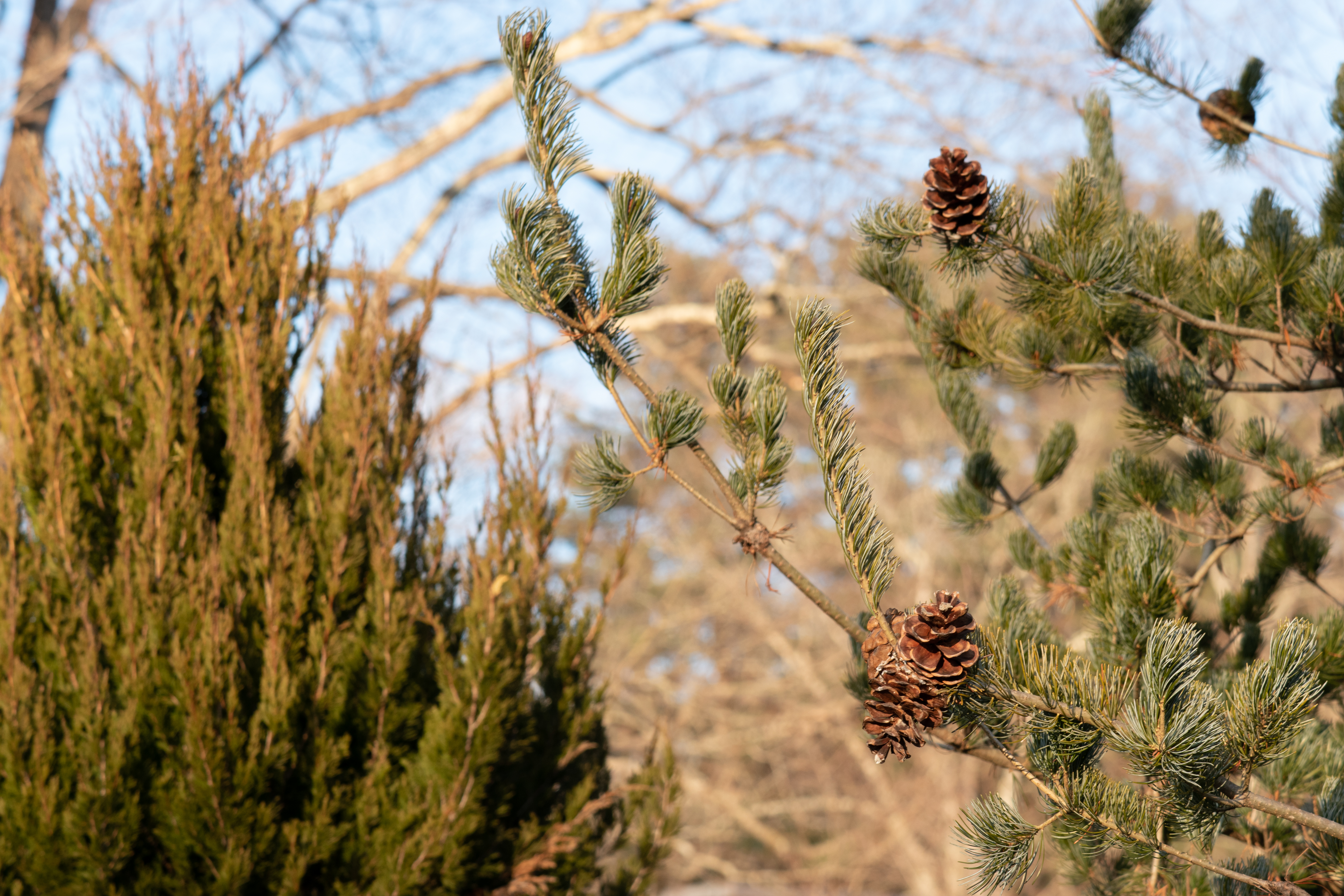