The Gardens at Elm Bank will reopen on April 1. Check out our year-round classes and events!

Elm Bank was first developed as a private residence in the 17th century. It was given its name in 1740 when Colonel John Jones acquired the land and planted elms along the banks of the Charles. The site was later occupied by the Loring, Broad, and Otis families before it was sold for $10,000 in 1874 to Benjamin Pierce Cheney, an early founder of the delivery company that later became American Express. Mr. Cheney joined the Massachusetts Horticultural Society in 1864 and became one of its most generous supporters.

At the time of his death in 1895, the estate contained over 200 acres. The property passed to Cheney’s eldest daughter Alice in 1905. In 1907, Alice and her husband, Dr. William Hewson Baltzell, engaged the architectural firm Carrère and Hastings to build a neo-Georgian manor house, and the most prominent landscapers of the day, the Olmsted Brothers, were hired to design and improve the gardens. The Cheney-Baltzells were grand entertainers, and their residence and gardens were designed in that spirit. Further details on the history of Elm Bank during this period are available in volume 8 of the Journal of the New England Garden History Society.

With no heirs wishing to live on the estate after the death of Mrs. Baltzell, a number of organizations then owned the property. In the 1940s, it became a seminary housing a group of Stigmatine Fathers, who constructed a school building and maintained the grounds. They also ran a popular summer camp in the 1960s and 70s. Later, Elm Bank served as the home of the Quinobin Regional Technical School. The entire site was placed on the National Register of Historic Places in 1987 and is currently owned by the Commonwealth of Massachusetts. In April of 1996, after a public process that included thoughtful consideration of all aspects of the site, Mass Hort signed a lease with the Commonwealth and pledged to bring Elm Bank back to life for generations to come.

The estate’s former carriage house has been renamed to honor the late Walter Hunnewell, former president of Mass Hort and a lasting patron of horticulture throughout his life. Now completely renovated and accessible to people with disabilities, the building’s original vaulted and trussed ceiling is exposed, capping a great event hall of nearly 3,000 square feet. With a large catering kitchen and a full complement of tables, chairs, and other event-related furnishings, the Hunnewell Building is available for gatherings of up to 250. An attached three-season tent, reached through the same Palladian-style doors that once admitted stylish motorcars, makes the building the perfect venue for symposia, lectures, weddings, charitable benefits, and other public events.

Constructed in 1957, this former school building has been renovated into the Society’s horticultural education center. The library, once housed in Horticultural Hall in downtown Boston, is now located on the building’s first floor. The building houses Mass Hort staff and classrooms. 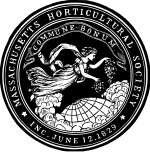 Massachusetts Horticultural Society is dedicated to encouraging the science and practice of horticulture and to developing the public’s enjoyment, appreciation, and understanding of plants and the environment.